The second Physical Computing Lab focuses on connecting a variable resistor to a microcontroller (the Arduino). The Arduino has to be programmed to respond to the analog input, and convert it to digital output(s).

First, I used a potentiometer, otherwise known as a “pot,” as the variable resistor. Twisting the knob of the pot will increase or decrease the current leading to the LED, in turn dimming or brightening it. 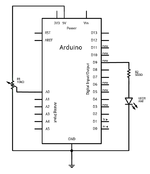 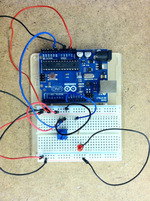 Next, I attached two FSRs (Force Sense Resistors). FSRs work by squeezing the rounded ends. The Arduino was programmed to light the LEDs as dimly or brightly according to how much pressure I was applying to the FSRs.